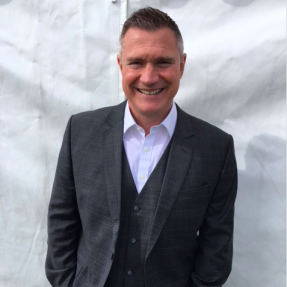 Rob Burns started his work life as a youth Soccer player with Wolverhampton Wanderers Football Club in England. He then completed a BA in Sports Studies at Staffordshire University. After this he lectured for two years at Stafford Further Education College and played high level semi pro Soccer.

He moved to the USA in his mid twenties and played Soccer briefly for Houston Dynamos before founding and directing Youth Sports International (1989-1996), a Houston Soccer ministry that taught several hundred children and teenagers per week. Over a thousand became followers of Jesus.

On moving to the Dallas/Fort Worth metroplex in 1996 to undertake a Masters of Divinity at South Western Seminary, he worked at Highland Park Presbyterian Church, setting up Highlander FC (1996-2000) another Soccer ministry which also taught several hundred children and teenagers per week. Several hundred became followers of Jesus. Jim Riley was Highland Park’s Sports Minister at the time and decscribed Rob as one of the most Spirit led evangelists that he had known.

During this time, Rob was actively involved with Wedgwood Baptist, Fort Worth, becoming an ordained Baptist Minister in 1999.

In 2000, Rob, his wife Jenny and their three boys came to Wales as missionaries where they have worked for the last 17 years For 10 years he was an International Mission Board missionary, focused on evangelism and developing disciples and leaders in Wales. During this time. Rob wrote a fully accredited, graduate Certificate in Christian Studies and Sports Ministry (St John’s Theological College, Nottingham). This was the first in the UK. He also partnered with ForMission College (York St John University) to develop and lead an MA in Missional Leadership. Rob was the Wales Campus Leader and a regular tutor on this program.

For 8 years, Rob was on the leadership team, with responsibility for mission, at Glenwood Church in Cardiff and was Executive Director of VOCATE, a vocational development centre which initiated a range of apprentice and internship programs for 18-25’s, a consultancy program for 50 plus’s and a mentoring and volunteer programme for all ages. VOCATE was also a licensed Agored (Open College Network) Accreditation Centre.

During this time, Rob started and jointly developed a mission focussed 12 week leadership academy for 18-25’s (in collaboration with Message Wales) and a 1 year intern training programme for 18-25’s.

Over the last 17 years, over 200 people have been trained deeply through these reflective practice programmes. There have been interns and students from three continents but there has been a special involvement from the USA every year.

In addition, over the last 6 years, Rob has been working very closely with Evangelical Alliance, Wales where he is a team member, to develop long term county wide relationships between Welsh and USA churches. Usually involving one large USA church and multiple Welsh churches in a county, Missional Links Wales looks to place 1 week mission experiences, interns, missionaries, consultants and proven experts from the USA into Welsh counties, in order to catalyse partnership and missional impact.

As a perpetual learner, Rob has continued to study, gaining a post gradudate certificate in Coaching for Leadership and an additional MA in Missional Leadership (finishing July 2018).

In other contexts in Wales and the USA, Rob consults with ministry leaders and local churches, acting as an encourager, trainer, leadership coach, strategist and missional consultant.